This is a guest post in Hindi by a friend.

Rajma Chawal “Red Kidney Beans and Rice” is a dish that is very popular in Punjab, India.

I recently turned vegan and one of my favourite and most tastiest sources of protein has been rajma on this diet. To eat it makes me feel close to my culture and I feel lucky to have been able to inherit my mom’s unique and special recipe that makes this dish particularly tasty. The blend of spices that it uses: black cardamom, green cardamom, cloves, cinnamon, bay leaves lend a degree of uncommon sophistication to it. The tomato, garlic, onion, ginger puree adds richness to the dish that makes it filling and satisfying. When you eat the dish it is not the same homogenous taste on every bite, the ingredients play a melody of flavours on your tongue that work together to create a meal that is both comforting and compelling.

Below are a few of my memories regarding this dish. 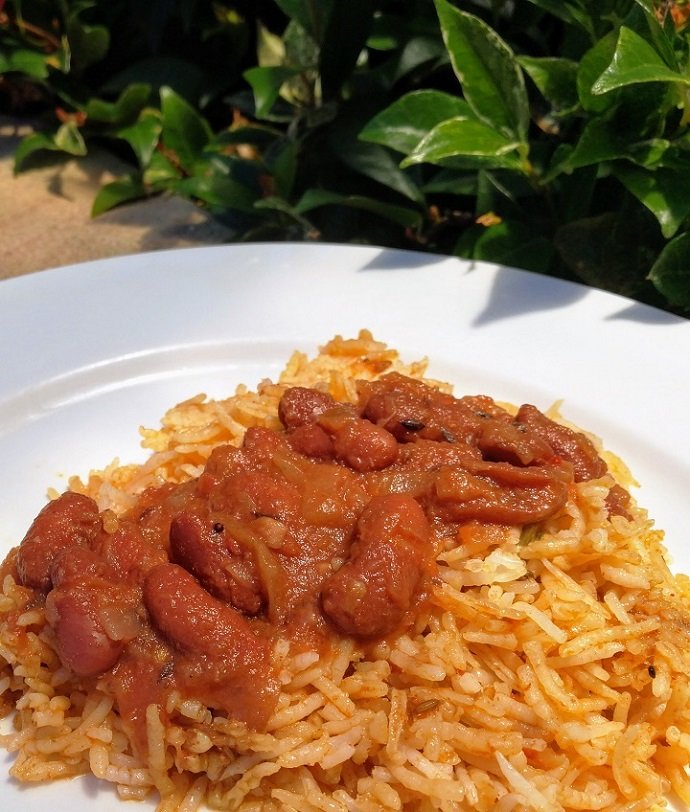 My family and I are on a plane to India from England when I was about 5 years old. The air hostess asks us what meal we would like to have - Chicken or Rajma. I thought the most obvious choice for anyone to make is Chicken but am surprised when my mom asks for Rajma. I ask her why she chose Rajma, she tells me it’s been her favourite dish since forever. I am intrigued and curious to understand what could be so awesome about Rajma that makes it better than Chicken for my mother.

My mom and I used to go to my dad’s auntie’s house very often while I was living in Delhi. Every time we went, my dad’s auntie always had only Rajma prepared for my mom and me. One day I complained: why must we eat Rajma all the time, isn’t there any other food in the world? My dad’s auntie told me it is my mom’s favourite and that is why she makes it.

When my mom, brother and I moved to Sydney and my mom got a full time job - money was short and my mom did not have much time to cook so every Sunday she used to prepare food for three days of the week and more often than not it was Rajma that she prepared. My brother and I enjoyed it but over time the repetition got boring and we asked for other things. My mom obliged us, but pretty soon my brother and I missed Rajma and asked to have it again.

I went to my maternal grandad’s house and was sitting with my maternal uncle, his wife and daughter, sharing a meal. I asked my cousin sister - what is your favourite dish. She tells me Rajma. I am amazed that it is the same dish that is my mother’s favourite.

I am at USYD, and I go to the Indian food section in the cafeteria, I see a dish there with the label “red kidney beans” - I know this is rajma and when I ask the server for it, I do not ask for “red kidney beans” but I ask for rajma - he smiles since my familiarity with the dish is uncommon amongst the people he usually serves.

A timeless and classic dish is one which still excites you no matter how much you’ve eaten it. Rajma is such a dish for me.